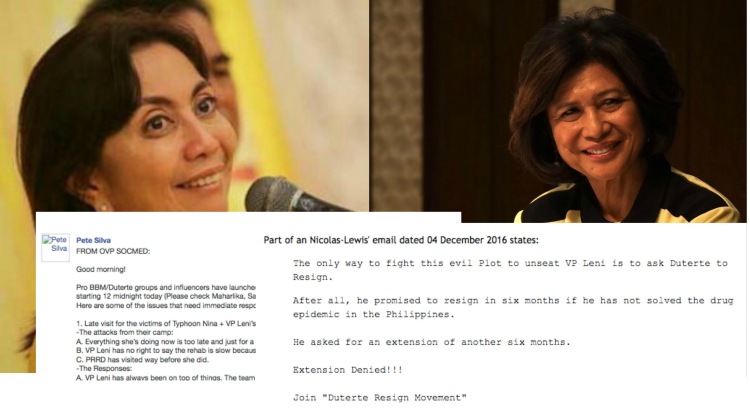 With social media abuzz with the so-called #LeniLeaks, i.e. the supposed exchange of messages between journalists working for 2 respectable media institutions, leaders of overseas Filipino groups, and the office of the second highest position in the land. If these are verified, as some top Duterte apologists (Thinking Pinoy, Sass Rogando Sasot, and others) allege, there is indeed a serious plot to remove the duly-elected president and reinstate the old political establishment, again evoking the narrative of a “fight between evil and good, democracy vs. dictatorship”.

Before I start, let me be clear. I have promised myself to remain silent and keep my views to myself and a select few to avoid getting involved in this increasingly bitter discourse. And both sides (dilaw and DDS) are playing a sinister game. I just want to stay in the middle and go on with my life.

Now, in the event these plots are put into motion, I will offer myself to put up a resistance to these plots. Here are those:

Personally, I have given Robredo the benefit of the doubt and even dismissed the claims she cheated her way to the Vice Presidency. I even hoped she would be sincere and be as hardworking as the President, she is willing to set aside personal differences to have a working relationship, but subsequent events proved me wrong. In my personal opinion, we wouldn’t even be in this mess had Alan Cayetano successfully convinced people he would make a good VP. Moving back, I always had the suspicion the “yellows” will try to devise a plot to remove President Duterte from office but I don’t think it will ever push through because it would be so stupid and tantamount to political suicide. With 8 out of 10 Filipinos giving their support, that is according to a recent survey by Pulse Asia, and the number of achievements within 6 months, and much of the people losing trust with the Liberal Party, and with Robredo having a rather lackluster performance (despite efforts showing the opposite), this will give them a very hard time in convincing people the president has to step down. They have nothing to blame but themselves on why we ended up in this situation.

In light of these developments, we have to stay vigilant because it will get more interesting as time goes by. Whether these allegations will be confirmed or not, this will further stain the credibility of the vice president and the Liberal Party by extension. Best hopes, this never pushes through, if they do, all we have to do is resist.

Note: As much as I wanted to avoid openly speaking out to avoid being caught in the political crossfire, I think it is best to speak out as these events are not helping the country. Despite some reservations over the President’s present policies and his brash manner, I still maintain my support and will not accept any attempt to reverse the verdict of the people expressed in the May 2016 elections. I will maintain an assertion we will not be caught in this mess if Alan Cayetano was able to pull off a victory which sad to say he did not. The only way for one administration to succeed if his second-in-command comes from his team. The US maintains a joint-ticket in elections, presumably to avoid these situations. Bongbong Marcos would have been a great vice president and appears to be willing to set aside differences but given the association with the Marcos name and efforts to abstain himself from responsibility over the atrocities committed under his father’s 20-year presidency he would have a hard time. The Liberal Party very much symbolized the political establishment and only have themselves to blame on why people resorted to populist tendencies, as is the trend across the world. 30 years since the EDSA revolution and the restoration of democracy but people have failed to reap the fruits of their newly-restored freedoms and felt it only benefitted the establishment, and this frustration gave rise to people promising swift solutions, and any attempt to reverse this in the guise of defending democracy will only be seen as an attempt at restoring the old establishment which is already in the process of being dismantled, at least in the eyes of those supporting Duterte. In this modern era where emotions trump thought, we must share a mutual responsibility in restoring this, as it will help us all. For both sides, let us not be blinded by fanaticism, instead be guarded by rationality and make sure it doesn’t violate our principles. It’s tiring.